TOWN OF DOVER NOTICE OF SPECIAL ELECTION AND SAMPLE BALLOT

OFFICE OF THE DOVER TOWN CLERK TO THE VOTERS OF TOWN OF DOVER:

Notice is hereby given of a special election to be held in the Town of Dover, on July 31, 2018, at which the officers named below shall be chosen.  The names of the candidates for each office to be voted for, whose nominations have been certified to or filed in this office, are given under the title of the office, each in its proper column, in the sample ballot below.

Upon entering the polling place, a voter shall state his or her name and address, show an acceptable form of photo identification and sign the poll book before being permitted to vote.  If a voter is not registered to vote, a voter may register to vote at the polling place serving his or her residence, if the voter presents proof of residence in a form specified by law.  Where ballots are distributed to voters, the initials of two inspectors must appear on the ballot.  Upon being permitted to vote, the voter shall retire alone to a voting booth and cast his or her ballot except that a voter who is a parent or guardian may be accompanied by the voter’s minor child or minor ward.  An election official may inform the voter of the proper manner for casting a vote, but the official may not in any manner advise or indicate a particular voting choice.

Where Optical Scan Voting is Used

When using an electronic ballot marking device to mark an optical scan ballot, the voter shall use a keypad to select the name of the candidate of his or her choice for each office for which he or she intends to vote.  To vote for a person whose name does not appear on the ballot, the voter shall type in the name of the person of his or her choice in the space provided for a write-in vote.

The vote should not be cast in any other manner.  Not more than five minutes’ time shall be allowed inside a voting booth or machine.  Sample ballots or other materials to assist the voter in casting his or her vote may be taken into the booth and copied.  The sample ballot shall not be shown to anyone so as to reveal how the ballot is marked.

If the voter spoils an optical scan ballot, he or she shall return it to an election official who shall issue another ballot in its place, but not more than three ballots shall be issued to any one voter. If the ballot has not been initialed by two inspectors or is defective in any other way, the voter shall return it to the election official, who shall issue a proper ballot in its place.

After Voting the Ballot

After an official optical scan ballot is marked, it shall be inserted in the security sleeve so the marks do not show.  The voter shall insert the ballot in the voting device and discard the sleeve, or deliver the ballot to an inspector for deposit.  The voter shall leave the polling place promptly.

A voter may select an individual to assist in casting his or her vote if the voter declares to the presiding official that he or she is unable to read, has difficulty reading, writing or understanding English or that due to disability is unable to cast his or her ballot. The selected individual rendering assistance may not be the voter’s employer or an agent of that employer or an officer or agent of a labor organization which represents the voter.

The sample ballot is posted at the Town Hall, Kansasville Grade School, and Kansasville Post Office for reference. 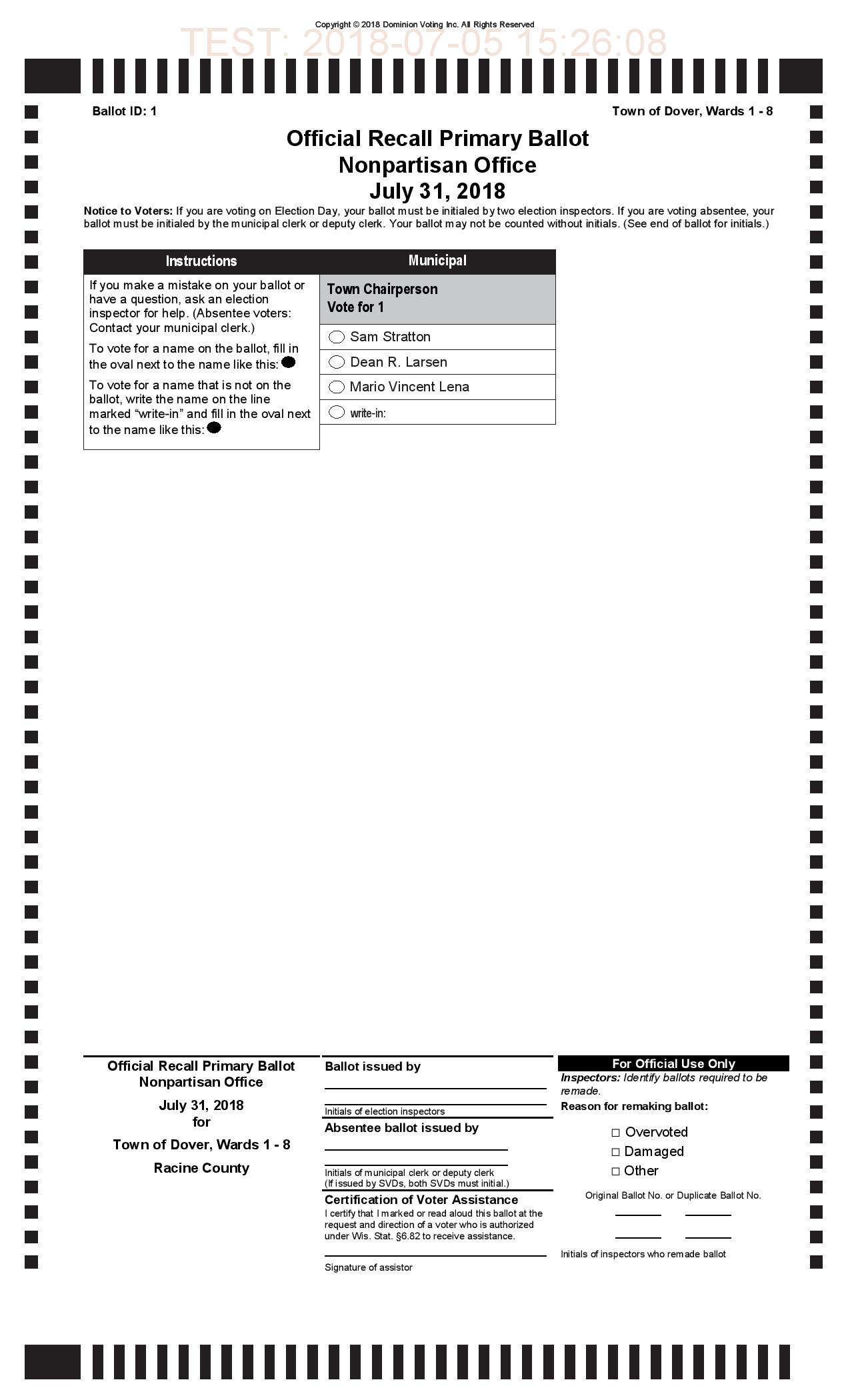